Will your next job as a landlord be with Homeland Security? 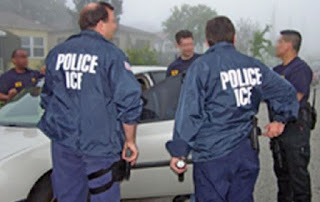 As landlords, we wear many hats: Marketer, psychologist, accountant, handyman, and much more. Now I see the possibility that another role might be heading our way …

The UK recently updated its Landlords’ guide to checking immigration documents. The guide is intended to help landlords conduct necessary document checks to establish whether a person has the right to rent in accordance with the Immigration Act 2014.

The 21-page guide goes on to list what landlords may consider acceptable documents. They include:


And if the landlord believes the document was altered or used by someone fraudulently, it should be reported to authorities. The Guide provides detailed samples of what a few of the documents should actually look like.

Landlords must copy every document they’ve checked. By doing that, they will be able to provide evidence that they’ve complied with the law if it is discovered that someone was living in the rental home who did not have a right to be in the UK.

On top of that, landlords may have to re-check time-limited documents the following year.

I’ve never asked a prospective tenant if they were here legally. From what I can find, in Florida I’m allowed to as long as I ask all applicants. Landlords in New York City and California are prohibited from asking such questions. However, I do make a copy of their driver’s license or some other photo ID to prove they are who they say they are.

What’s ahead for us landlords when a new President takes office on Jan. 20, 2017?

I’m not going to comment on our nation’s immigration dilemma in this forum. I’ll leave that political minefield to The Donald, Billhillary, and others jockeying for B.O.’s job.

But if The Donald moves into the White House, there won’t be much we’ll have to do since he is going to round up all 12 million illegals (undocumented workers) and send them back from where they came. Then when he lets them back in, they’ll be squeaky clean. Yeap, that should work.

And with Billhillary, have you ever known a Democrat who didn’t like a new law? So my guess is that she’ll pass the buck to us like has been done in the UK.

For more ideas on buying and managing rental properties, pick up a copy of What You Must Know BEFORE Becoming a Greedy Landlord. It’s available in paperback and Kindle formats at Amazon. You can also order it from Barnes & Noble, Booklocker, iTunes, and kobo.