I’ve always liked real estate: Single-family rentals, duplexes, and self-storage facilities. As long as you buy it right and manage your expectations, real estate can provide a good cash flow and long-term growth.

And I’ve written before how real estate investment trusts (REITs) can let you dip your toe in this sector without worrying about the day-to-day hassles that come with being a landlord. Let’s face it, though, the market really stinks now, especially in the U.S.

Well, you might want to take a look at our neighbors to the north. It seems the Canadian real estate market has weathered the global financial crisis better than most.

• Strong exports of oil and other natural resources

Watch this YouTube video to learn what the Canadian REITs are doing in their own country and around the world.

And here are three Canadian-based real estate funds you might want to check out:

George
Posted by George at 8:32 PM No comments:

Boomers not up-to-date on Medicare

Boomers are turning 65 at a record rate … 10,000 a day in fact … which means they’re eligible for Medicare.

However, a survey sponsored by the National Council on Aging and United Health Care found that many boomers are in the dark when it comes to Medicare. For instance,

• 46% of respondents have never shopped around for better Medicare coverage because many (41%) thought they couldn’t save any money,

• 16% didn’t understand Medicare at all,

• Less than half were familiar with the Medicare prescription drug “donut hole” or coverage gap, and

• Only 12% described their understanding of the health reform law as excellent or good.

What’s more, many respondents were not aware of extra benefits that can provide critical assistance, including Medicare Savings Programs, which help people with limited income pay for some or all of their Medicare costs, and Extra Help, which helps pay for prescription drug costs.

Look, no one knows what the future holds for Medicare. But ignoring what it currently offers could cost you big bucks down the road!

Click here to find more details about the survey and links to a bunch of helpful sources on Medicare.

P.S. With so much uncertainty surrounding Medicare, protecting your finances from the ravages of long-term care is more critical than ever. Learn what you can do about it now.
Posted by George at 6:34 AM No comments:

I had the following come in from a reader:

“George, we are considering purchasing a rental property. The question we have is: Can our adjusted gross income (if it is too high) preclude us from deducting any losses (depreciation, property taxes, mortgage interest) from our current income taxes?

“Also, do people incorporate and what would that do for us? I appreciate your input.” —Kay

“Kay, your income should not prevent you from deducting losses. For more info, here are the instructions.

“Most taxpayers, including me, own the property personally and just file a Schedule E. Sure, you could incorporate. Tax wise, though, I don't see what that would accomplish for you. And a mortgage company will make you personally guarantee the note.

“Yes, it might shield you from liability in case of a law suit. But a good liability insurance policy can protect you even better.”

P.S. Do you have a question about your real estate investment? Post it here or drop me an e-mail.
Posted by George at 7:57 PM 2 comments:

Bus Travel in Costa Rica Is a Snap 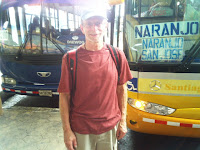 Visitors frequently rent cars in Costa Rica. But that can be pretty expensive. The price of the car isn’t bad. It’s the insurance that’s the killer. Insurance can easily cost as much as the car rental itself. And gas is over $5 a gallon. So for one week, you can drop $500 or more.

Plus driving can be hairy ...

You'll likely discover why Ticos aren’t famous for having patience behind the wheel, and how the roads are not what we are used to in the U.S.

Well, my dad rented a house in Puriscal, a small town in the Central Valley, for two months. By the time I got there for a week’s visit, he had figured out how to travel just about anywhere in the country for darn near nothing. And he hardly speaks a word of Spanish!

The house was a 15-minute walk from the Puriscal bus station. From there buses go to San Jose for less than $1.50. The ride takes about an hour. Early in the morning and late afternoon it seemed as though they ran non-stop … one after another. Once you get to San Jose, it’s easy to hop another bus to where ever you want to go.

One day we went to Poas, another day to Jaco. It was a piece of cake. The cost: About $4.

Also from the bus station, you can walk to the Pedestrian Mall, the Farmers Market, the Teatro Nacional, and a bunch of other cool places.

The bus stations may seem chaotic: Vendors hawking their wares, families with groceries for the week, and cabbies hustling for fares. But it is organized chaos. Unlike in the U.S., people wait patiently in lines for their bus.

Of course safety is always a concern, no matter where you travel. And the media loves to play up crime against tourists. After two months, though, at no time did my dad feel in danger. Puriscal has virtually zero crime. And in San Jose, police were on every block — two or three together as a show of force. They were friendly, too. And the ones whom we asked for directions, spoke decent English.

I could go on and on. But if you’re looking for a unique cultural experience when traveling in Costa Rica, forget the over-priced air-conditioned rental car with a GPS. Travel like the Ticos do … take the bus. They’re clean, reliable and cheap.


George
P.S. Have you dreamed about moving to Costa Rica? Then you should check out my friend George Lundquist’s retirement tour.