Retirees and Those Close to Retirement Piling Up the Red Ink

According to the Employee Benefit Research Institute (EBRI), retirees and those close to retirement are finding themselves with rising levels of debt. The EBRI’s study found that the average debt for someone 55 and older had shot up almost 120% since 1992 to $70,370. Credit cards were a contributor to this increase. However, housing refinancing was the biggest culprit! This is the result of Americans who bought during the housing boom and then turned their homes into ATM machines as market prices seemed as though they’d go up forever. So now our generation faces one more obstacle for retirement security. If your debt is continuing to mount and you’re serious about retiring within the next 5-10 years, you better start getting your act together, Boomer. Put together a budget. Cut out everything you possibly can and become a debt hater. Put as much as you can into your 401(k) plan, your IRA and your Roth IRA. And save, save, save because you’re going to need every nickel of it. Best wishes, George
Posted by George at 1:18 PM No comments: 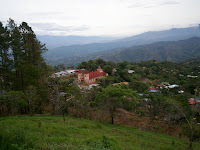 I get to Costa Rica quite often. I love the place … the mountains … the beaches … the volcanoes. But I’ve also seen how it is becoming a preferred destination for Americans seeking high-quality, inexpensive medical care. With all the ninnyhammers in Washington blabbering about health care reform, I thought I’d take a look at how Costa Rica’s prices compare to ours. So I asked a good friend of mine who lives there, George Lundquist, about his experiences. Here’s what he had to say: “My wife and I have used Costa Rica’s medical facilities several times: George

We have our six months blood and urine lab tests done for free on our National Health Insurance (CAJA) and see our personal, local GP for $20 to get the results. Then he writes the prescriptions on the CAJA, which are filled for free.” George and Aija moved to Costa Rica in 2001. Today, he is the go-to-guy if you are considering retiring in Costa Rica. He even runs a top-notch tour to show you how you can live very comfortably there on Social Security alone! Here’s his Web site: http://www.costaricaretireonss.com/index.php. Scroll to the bottom and you’ll find links to the La Cima and Biblica Private Hospitals. They will quote on any procedures. Best wishes, George

Posted by George at 5:46 PM No comments:

The Center for Retirement Research at Boston College just updated its National Risk Index. And it’s not a pretty picture … This study measures how prepared Americans are for retirement. It looks at households’ financial assets, housing and changes in Social Security benefits. And it concluded that 51% of Americans aren’t prepared to retire at age 65. That up from 44% in 2007. But hold onto to your hat fellow Boomers … those numbers don’t include the costs for heath care or long-term-care! If they were, a downright depressing 70% of Americans won’t be able to retire. Costa Rica is looking better and better with each passing day. In the meantime, though, reduce your debts as quickly as possible. Cut up those credit cards and sock as much as you can into your 401(k) and IRA. And by all means learn how to protect your wealth against the greatest risk you face. Click here to learn more. Best wishes, George
Posted by George at 5:55 PM No comments:

35 Million Workers About to Take It On the Chin

Our officials in Washington claim that only the “big money earners” will pay higher taxes under the “redistribution of wealth” policy that’s overtaking our country. Well here’s an example of how those benevolent folks are about to dip into our pockets a little deeper … Flexible Spending Accounts (FSAs) are a sweet benefit that lets employees pay some of their medical expenses with pretax money. That means if you’re in the 25% tax bracket, you could save 25% on out-of-pocket medical costs for things such as prescriptions, eyeglasses, and dental work. So you can understand why FSAs are popular. In fact, 35 million workers, with an average salary of $55,000, participate in them!
Your employer sets the amount you can set aside each year … usually between $3,000 to $5,000.
But within the health-reform bill that Congress is debating, the most you could contribute will be $2,500. The means the average worker stands to lose $625 in tax savings. The House limits wouldn’t take effect until 2013. The Senate’s limits in 2011. There you have it: Another example of Washington looking for every dollar it can find to fund politicians’ irresponsible spending ... even if that means going after American’s workers. Best wishes, George
Posted by George at 6:26 PM No comments: