Smile … you’re getting paid to wait!

It’s been a super busy hurricane season, and it’s not over yet ...

Harvey, Irma, and Maria made landfall in Texas, Florida, and Puerto Rico, respectively.

And it was the first time in recorded history when two 150-mph hurricanes were in the Atlantic at the same time.

I’ve lived in Florida for decades. So I know what it takes to prepare for a monster storm that’s beating a path to your door. And when Hurricane Irma looked as though it was going for us, I didn’t waste any time preparing for the worse.

Plywood, screws, cordless drills, and generators flying off the shelves!

I needed a heavy-duty extension cord. So I went to Home Depot (HD). Finding one was a piece of cake. Paying for it was a different story …

The registers were fully staffed, and all the self-service machines were working. Even so, the lines at each were at least 25 bodies deep. Plywood, screws, cordless drills, and generators were flying off the shelves.

I was stuck at the far end of a checkout line. There was a fellow ahead of me who had a generator, a half-dozen pieces of plywood, and several boxes of screws on his cart; he looked frustrated.

I took a deep breath and smiled. Not out of arrogance because this guy had a heap of hard work ahead for the next few days, and I’d been through this several times before and was for the most part all set.

I was thinking about what a great business this was. A true American success story.

Two guys and a dream

Home Depot started out in 1978 with two guys who had a dream to create a superstore that would offer a huge variety of merchandise at great prices and with a highly trained staff. 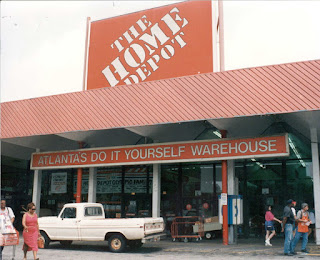 Now Home Depot is the world’s largest home improvement retailer, a Dow component with more than 2,200 stores in three countries filled with stuff every homeowner needs.

And what made standing in that line even better was knowing that a small piece of that man’s $1,000+ purchase would land in the pockets of individual investors, just like you and me.

Plus after the hurricane passes, he and thousands of others will be back. They’ll need things they can’t buy at Wal-Mart and Target, such as: face masks, sledgehammers, crowbars, plastic buckets, wheelbarrows, flooring, shovels, and sheetrock.

Get paid to wait

As investors, we all want to see our picks go up in value. But what I love about stocks like HD is that they pay you to wait. In fact, Home Depot has been consistently paying dividends since 2000.

You can see in the chart below the share growth over the past 8 years. During the recession Home Depot cut back by discontinuing new store construction, closing 15 U.S. big box stores, and canceling 50 future store openings. Yet the company endured.

Since then shares have soared, and the trend is clearly upward.

Rebuilding from the deluge of recent natural disasters will certainly boost sales and profits. Longer term, the demand for housing is on the rise according to the National Association of Home Builders. 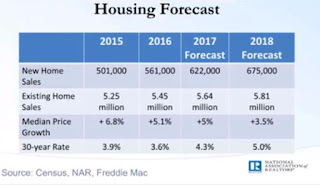 Moreover, according to Zacks, Home Depot has some of the strongest comparable store sales in the entire industry. Last quarter, sales and earnings reached historic highs. At the same time, online sales grew 23% and represented more than 6% of total sales.

Stock buybacks are on the rise too, which is a good thing for shareholders ...

Shares continue to hit new highs and are up about 24% so far this year.

Is this the time to buy HD?

I’ve owned HD since 2007. And in my opinion it’s a solid company with a track record of consistent growth and competitive dividends and worth considering for your portfolio.

So if you do decide to pick up some HD shares, the next time you’re stuck at Home Depot behind a line of shoppers loading up on home supplies, don’t be impatient … SMILE … you’re getting paid to wait.
Posted by George at 12:41 PM No comments: 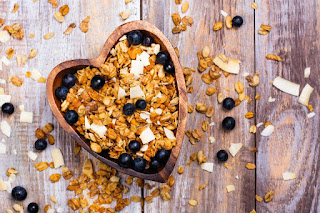 What's wrong with a little love? A lot, according to Washington bureaucrats.

For the full story on what the FDA has against a small bakery and their secret ingredient, click here.
Posted by George at 9:55 AM No comments: