MetLife just released its Market Survey for Long-Term Costs, and it seems that prices have gone up since I wrote A Boomer’s Guide to Long-term Care. On page 4, I had written that the basic cost of long-term care in the U.S. was:

But that was back in 2006! Now, according to MetLife, the cost has shot up to:

The newest numbers don’t mean that my book is out of date. All of the strategies I give to protect your wealth and assure you can get the quality of care you want are still as valid as the day I wrote them. And as far as ObamaCare doing anything to help you … according to The Washington Post, here’s what Sen. Kent Conrad (D-N.D.) had to say: "a Ponzi scheme of the first order, the kind of thing that Bernie Madoff would have been proud of." The deal is that you would begin paying premiums immediately, but you couldn’t get any benefits until 2016. Then you’d be eligible for $75 a day, an increase since I reported on September 24. Let’s break out the calculator ... In today’s dollars, $75 a day would cover about 34% of the cost for a private room ($75 ÷ $219) … not a heck of a lot. But remember, the Obama plan won’t pay a single cent until 2016 … six years from now. So if we figure a 5% annual increase (health care costs typically outpace inflation), a $219 room will cost $293! And the $75 will only represent 25% of your cost. You’d be $218 short each and every day you need care. That’s a whopping $79,570 out of your pocket for the year. If you are willing to stay in a semi-private room, the amount you’ll have to cough up a mind-blowing $69,474. I’ll probably wait until ObamaCare passes before updating A Boomer’s Guide to Long-term Care … just so the numbers are accurate. In the meantime, I urge you to pick your copy. Simply click here. Because no matter what Washington throws in the kettle, it’s not going to be enough in case your health changes. Best wishes, George

Posted by George at 6:52 PM No comments:

Last Tuesday, I gave you a little insight into what the Treasury Department is doing to keep track of people trying to hide assets overseas, specifically in Switzerland. I even made comment in jest regarding Costa Rica … my home away from home. Well it seems that if you’re thinking that Costa Rica is off the IRS’ radar, no matter what your defense may be, you better think again. A.M Costa Rica reported that the IRS had cuffs put on three U.S. expats who thought they could outfox Geitner’s posse. The three are accused of running a tax scheme that teaches U.S. citizens why they don’t need to pay income taxes. Two of them, a husband and wife, didn’t pay 2001 income taxes, sold their assets in California and filed a false bankruptcy petition. Tax fraud in Costa Rica is nothing new. But what’s interesting in this case is that the two women then went on a PR campaign to stay in Costa Rica as political refugees hoping to capitalize on the country’s tendency to welcome female fugitives from the U.S. Their sob stories didn’t work, and they face a boatload of charges. You can read the complete tale at: http://www.amcostarica.com/091509.htm#32. Best wishes, George
Posted by George at 5:18 PM No comments:

I wrote an article titled Lump Sum Versus Regular Pension Payments. It went into what you should consider before accepting an employer’s offer to cash out your pension plan. This piece generated quite a large number of e-mails from readers, including this one from Sandra:

I have a few concerns that I’ve passed on to Sandra:

1. Did she simply take the payout from her former employer and stick it in her checking account? 2. Is she over 70 ½ years old? If so, required minimum distributions from her IRA might apply.

I hope she gets back to soon; the IRS loses its patience very quickly. In the meantime, you can read the complete article at: http://www.investopedia.com/articles/retirement/05/lumpsumpension.asp. Best wishes, George

Posted by George at 3:05 PM No comments:

There has been a lot of press lately about the IRS clamping down on fat-cat investors trying to hide money in Swiss bank accounts. But did you know that not one … but two … overseers of our country’s money want to know about all the loot you’re stashing outside the U.S? It seems that you’re supposed to report financial assets held offshore to the IRS and the Treasury Department. Strange … considering that the first is part of the second. And if you don’t, you could be looking at a hefty fine: Up to $10,000 per year if it’s simply an oversight on your part, or more if Geitner’s posse can prove that you intentionally tried to deceive him. Any financial asset worth more than $10,000 must be reported. This includes:

It’s understandable that the IRS wants to get its piece of investment income and capital gains you earn overseas. But making you report those accounts to the Treasury Department on its Foreign Bank Account Report (FBAR) is too much. And don’t count on your tax preparer to remind you to file … many aren’t aware of it. 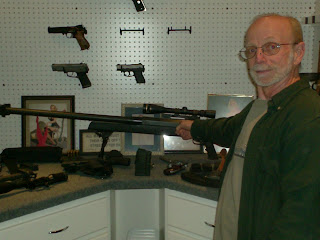 How about the Spam, guns, and ammo you’ve stockpiled in the hills of Costa Rica? I suppose that in the near future Geitner will want to keep tabs on those, too! And what about the wealthy legal immigrants who keep money in their home country? If they don’t notify the Treasury, they could be in a heap of trouble. Yet we coddle the illegals who flood across our border each day! … go figure. Best wishes, George

Posted by George at 6:55 PM No comments:

As I reported just two days ago, the outlook for Social Security recipients was bleak. Now it’s official … the Social Security Administration announced that for the first time in 35 years, seniors will not be getting a cost-of-living adjustment for 2010. The average monthly payout will remain at $1,095. The lesson for Boomers: Make the most of your 401(k), traditional IRAs, and Roth IRAs because Social Security is no longer the sacred cow it was for your grandparents. Best wishes, George
Posted by George at 7:21 PM No comments:

No Raise For You!

Remember the Seinfield episode where George asked for a piece of bread and the Soup Nazi growls, “No soup for you.” Today’s seniors who depend on Social Security have been given similar bad news when it comes to an increase in their benefits ... For the first time in 35 years, Social Security beneficiaries probably won’t receive a cost-of-living adjustment ... the yearly increase that helps them make ends meet and keep up with rising prices. Millions of seniors will see their checks stay flat – or even decrease – while the costs of prescriptions, utilities and health care continue to climb fast. The official measure of inflation – the consumer price index (CPI) – has not increased in this crummy economy. Yet the things seniors need most are skyrocketing! The bad economy this year has hit seniors harder that most other folks. They spend an average of $4,400 out of pocket every year on health care alone. With home values dropping, losses in the stock market, and low returns on interest bearing accounts, it's no wonder that more Americans are counting on the promise of Social Security. My point in bringing this to your attention is to highlight the importance of not depending on the government for your wellbeing, including your retirement. Take responsibility for yourself: Get your finances in order, chop your expenses to the bone and save … save … save! Best wishes, George
Posted by George at 6:59 PM No comments:

If your household’s modified adjusted gross income (MAGI) is above $100,000, you can’t convert your IRA to a Roth IRA. That means you miss out on all the great benefits Roths offer, such as tax-free buildup, tax-free withdrawals, and no minimum distribution requirements. But come January 1, 2010, high-income earners who were previously unable to convert their IRAs into Roth IRAs will be allowed to do so thanks to the Pension Protection Act of 2006. When you convert from a traditional IRA to a Roth IRA, you’ll owe tax on the amount converted. However, the revised rules give you a one-shot opportunity to spread the additional taxes out over 2010, 2011 and 2012. Consequently, you could put off the final tax payment until 2013. When you look all the red ink flowing out of Washington these days, this could very well be a ploy to bring in some quick cash. After all, money left in traditional IRA might not get taxed for decades! Even so, no matter what the Treasury Department’s motives are, this is a heck of a deal that’s worth checking out. Best wishes, George
Posted by George at 4:50 PM No comments:

Is Your Life Insurance About to Blow Up Your Estate Plan

Many people bought life insurance so their beneficiaries will have immediate cash to pay estate taxes, income taxes and other expenses that pop up after they die. The strategy certainly had merit: Pay premiums for a set number of years; then the cash value would generate enough of a return to cover the cost of insurance. In other words, the policy would pay for itself. This, of course, assumed that interest rates would remain high and the stock market would continue booming. However, now that interest rates are next to zero, and the stock market has taken a dump, scores of universal life and variable universal life policies are in trouble. And policy holders are shocked when they’re notified that their policies are about to lapse. This means they could end up paying premiums a lot longer than they ever expected! If you haven’t taken a close look at the policy you bought as an estate planning tool, you might want to dig out a recent statement. Compare the cash value to the projection you received when you were sold the policy. If the numbers aren’t close, contact your agent. And if your agent doesn’t provide an answer you understand, find an independent insurance expert to evaluate the policy for you. Best wishes, George www.e-financialwriter.com
Posted by George at 4:53 PM No comments: